“The most rewarding thing I’ve ever done” 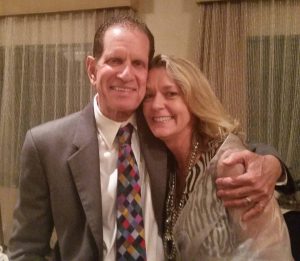 With skyrocketing rates of obesity and diabetes, we’re facing a future epidemic of people in need of long-term dialysis or—infinitely preferable—a kidney transplant. Although most of us could, theoretically, donate a kidney—because we’re born with two and we only need one to function—organ donation is, nevertheless, a big decision, involving major surgery, hospitalization, and time off from work.

So, what is it like to donate a kidney?

Ginger Gillquist, who donated a kidney to her husband, Mick Kronman, 25 years ago says, “Besides giving birth to my son, donating a kidney was the most rewarding thing I’ve ever done.

“I live every day with the person I donated to, who thanks me every day for saving his life. I was also the person who saw every day how sick he was and how much he suffered while waiting for a transplant. For me to be a near-perfect match to give him one was, except for the birth of our son, the greatest joy of my life.”

Ginger and Mick were only the 100th spousal transplant in the U.S. (and 14th at Cedars Sinai Medical Center), helping usher in the age of non-blood-relative transplantation.

“We’d only been married for three months,” Ginger says. “In fact, Mick found out his previous kidney transplant was in trouble when he had the blood test for our marriage license.

“When I found out he needed a transplant, I immediately volunteered. Mick had previously received a kidney from his brother, and he had no other blood relative who could donate.

“Although Mick points out that I’d previously been afraid of needles, I had no qualms about going through the extensive medical work-up required, along with a psychiatric evaluation. I wanted to save my husband’s life! When we found out I was a match, I drove home from work and we just held each other sobbing. It was such a joy to learn that I could give life to the person I was closest to—my lover, my best friend.”

Three years later, Ginger and Mick had no trouble conceiving and welcoming their son, Cole, who just graduated from college in June.

Although Ginger’s donation was an overwhelmingly positive experience, she acknowledges that she “would have been devastated” if her donation had failed—if Mick’s body had rejected her kidney.

“Donating a kidney is a demanding experience on every level,” she explains. “It’s rather daunting physically—the medical work-up, the surgery, and then the recovery. But it’s also quite demanding emotionally. You have so many hopes riding on the surgery’s success. If it’s a failure…Well, that would be heartbreaking.”

As it turned out, Ginger’s kidney functioned well for Mick for 13 years, but eventually Mick needed another transplant, and another, and finally even a fourth, the one he lives with today. For that transplant, a friend was willing to donate, but wasn’t a match for Mick. As a result, the friend donated his kidney to a donor pool, from which it went to someone who was a good match, while another donor’s kidney went to Mick.

For Ginger and Mick, however, her kidney donation is “a gift that keeps on giving.

“It’s definitely made our bond stronger. We’ve been through so much together; the highs, the lows; the near-death experiences, the seemingly miraculous recoveries. It’s made us appreciate every day of health we enjoy together.”