How to survive your partner’s kidney disease diagnosis 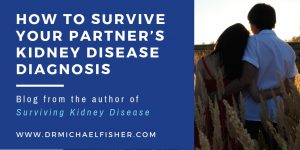 My friend Bonnie was aware that her husband had kidney disease when she married him, but he’d had the condition since childhood and was healthy and athletic so she didn’t really understand the implications of his condition. Her husband retained 50% kidney function, which is enough for people to live comfortably. It wasn’t until her husband’s kidneys suddenly went into severe decline that she understood how serious kidney disease can be.

“The first time he was in renal failure,” she says, “he was in total denial. He wouldn’t follow the doctor’s instructions. He kept avoiding dialysis. He avoided getting on a transplant list. Worse, he was very, very angry about this turn of events. After being been sick as a child, he’d spent most of his life not allowing illness to define him. He’d created his identity proving he could do thing others had said he couldn’t, like crewing in college and being a marathon runner.

As Bonnie was finding out, renal failure also affects the brain. Toxins build up in the blood, altering cognitive function, as well as personality. This is in addition to the psychological and emotional distress patients often feel as a result of losing control of their lives.

“Suddenly my husband had a lot of memory problems,” Bonnie explains, “but didn’t realize he had memory problems. He’d argue that he’d done things he’d forgotten to do; he accused others of not telling him things when they had. It was a bit like living with somebody who has Alzheimer’s.”

“The #1 Lesson I want to share with other partners in kidney disease: Kidney disease affects a patient’s cognitive and psychological functioning. It’s the disease; not the person.”

Because her husband was in angry denial, it fell to Bonnie to manage his healthcare—get him into dialysis, initiate signing up for a kidney transplant, and even accompany him on his myriad doctor appointments, knowing that her husband might not remember all that he was told, nor advocate effectively on his own behalf.

Bonnie calls this Lesson #2: “Your partner needs you to be his or her advocate and spokesperson.”

“The first time my husband was in renal failure, the dietitian tried to brush me aside and give the dietary instructions to my husband. I let her, because I didn’t understand at the time that he wasn’t going to have the cognitive awareness to remember everything she was telling him. Nor was he going to have the energy to prepare his meals. The spouse needs to be present at all the doctor appointments and understand what’s going on so  they can speak on the patient’s behalf.”

In fact, Bonnie’s advocacy was lifesaving on several occasions when her awareness of her husband’s “normal” helped to inform doctors and dialysis staff so that they could treat him appropriately.

She says: “Sometimes healthcare providers forget that, as the spouse or partner, we’re in this too. We’re part of the team—especially if the patient doesn’t have the cognitive wherewithal to keep track of the whole course of treatment.”

When her husband at last got a transplant, “he immediately returned to his former self again!” Bonnie says. “Then I understood just how much the disease had affected his brain, as well as his physical functioning.”

Unfortunately, as so often is the case with chronic kidney disease, the health reprieve was not permanent. Three years later, Bonnie noticed that her husband’s feet were swollen. He admitted that he didn’t feel well. She said, “These are signs of renal failure. We need to find out if you’re rejecting your kidney.”

Sure enough, her husband’s blood work indicated kidney failure and, overnight, Bonnie and her husband’s lives were again thrown upside down. They were again facing dialysis and the emotional rollercoaster of waiting for another kidney transplant. But Bonnie vowed that this time she’d handle her part of the experience differently.

“I made a commitment to have a lot more empathy, walk away when he was belligerent, and also to tell him calmly that I wasn’t going to accept that kind of behavior. I think that’s an important distinction: to empathize with what your partner is going through but not to accept illness and frustration as an excuse for poor behavior.” 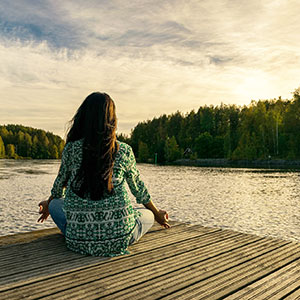 Which brings her to Lesson #3: The importance of self-care.

“You hear that all the time, but when your life is in crisis it can seem impossible to do. I was the only one who could work, take care of the kids and the household, and help my husband. That was already more than I could get to; how could I add something as nebulous as self-care?”

Caregivers, in general, tend to have generous spirits and want to help. But just like putting on your own oxygen mask before you help another, if you burn yourself out, you can’t be any use to anyone.

“I tried to do it all,” Bonnie says, “without realizing the cumulative nature of stress. And if your spouse is going through stress, you are going through it too. Now, years later, I still have pretty severe adrenal fatigue. I’m tired a lot, and I can’t push myself. My body won’t let me.”

Bonnie also realized that there were resources she could have turned to, but she was too proud to ask for help. “Other people could have taken my kids to school in the morning, or picked them up in the afternoon, or even helped them with homework,” she says now. “There are after-school programs for that.

Bonnie found an unusual method of self-care: she went to graduate school for a master’s degree in educational counseling. “It was my oasis,” she says. “It was how I got away from the trauma of my life—concentrating on something else so completely for several hours, several nights a week.” She also emphasizes the importance of spiritual support, particularly in crisis.

“The thing that gets me through anything is my beliefs,” she says. “I believe that everything happens for a reason and that our souls choose our journeys as opportunities for growth. I’ve used our family crisis to become more compassionate, to teach our children about resilience, and also to teach them about how families support one another. That’s a big part of how I cope: I turn it into an opportunity to grow.”