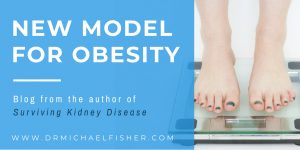 When I was promoting a childhood obesity initiative 15 years ago, our organization, the non-profit called the Diabetes Resource Center of Santa Barbara County, became the first affiliate of the national organization called America on the Move. The founders were scientists who made the simple case that if we just moved more and ate less, the weight would melt off of our bodies.

The trouble with their theory was that it did not prove to be correct. The laws of thermodynamics—e.g., energy in = energy out—did not work in human beings.

That model was called the conventional model and considered energy intake and expenditure to be functionally independent processes receiving no feedback from circulating fuels or endocrine signals.

This model is inconsistent with recent information about the current state of obesity science because it fails to factor the known neuroendocrine mechanisms that regulate energy homeostasis. Weight loss and obesity prevention are not simply a matter of willpower, which further complicates the treatment of a daunting problem associated with myriad severe chronic illnesses that are reaching epidemic proportion in the United States.

The “Carbohydrate–Insulin Model,” postulated by Ludwig and Ebbeling, suggests that carbohydrate intake is the primary cause of human obesity, and that insulin is the primary effector. Simply put, ingestion of high glycemic foods yields an immediate release of insulin to lower the elevated blood sugar. It is far more complex because insulin traps metabolic fuel inside of adipocytes (fat cells). The reduction in circulating fuel leads to bad things! Appetite increases, energy expenditure decreases, weight gain and obesity follow. Insulin is lipogenic or, in simple terms, it fosters the deposition of fat.

In my book, Surviving Kidney Disease, I explain in a limited fashion the physiology of the adipocyte. The adipose tissue that forms around the waist and internally around our visceral organs such as the liver actually become complex endocrine organs that synthesize hormones that promote increased appetite and peripheral resistance to insulin. The pancreas is heavily taxed, pumping out insulin to meet the rising blood sugar until it can’t compensate. What results is type 2 diabetes.

Finally, just so you can see just how dangerous this cycle is, consider these facts. Large deposition of adipocytes also cause hypertension, inflammation, promote new blood vessel growth that may aid and abet cancer, cause fatty liver and cirrhosis of the liver, osteoarthritis, and often cause deep emotional wounds from embarrassment and ridicule for being obese.

Obesity is the epidemic of the 21st century with far- reaching health consequences for our children and their families. Where is our public health department? Where is the outcry from pediatricians, nutritionists, internists, nephrologists, liver specialists, or the American Medical Association? Do we have a Surgeon General?

“The Eastside Wellness Initiative” is continuing the work of the Diabetes Resource Center of Santa Barbara County to deploy a comprehensive wellness initiative at the Franklin School, composed of about 400 children, 99% of whom are Latino. BMIs demonstrate severe obesity and overweight children, who are destined to become diabetics and eventually develop cardiovascular disease, blindness, and kidney failure without immediate, long-term, and effective intervention.

Past experience of the Diabetes Resource Center of Santa Barbara County demonstrated successful reductions in BMIs of obese and overweight students. Our new program will add an important dimension to the initiative. It will utilize Dr. Nadine Burke Harris’s ACE questionnaire, which identifies significant traumas in the lives of the children and the family. Student volunteers with expertise in psychology, as well as community “Promoturas de Salud,” will offer support to the children and parents, encouraging them to fully partake in the nutrition, exercise, gardening program and cooking classes meant to promote healthy lifestyles.
Yes, this is a major undertaking, but do we have a choice?

The Eastside Wellness Center data will be collected and the results hopefully confirm our belief that if the approach is “comprehensive,” success will follow.